Article printed in Daily Hampshire Gazette, May 8, 2017. By Morgan Hughes

NORTHAMPTON — Despite the threat of rain, an estimated 30,000 people were out on the streets for the 36th annual Northampton Pride Parade, which kicked off at noon Saturday.

Tens of thousands of cheerful and colorfully decorated people lined up around Main and Bridge streets to celebrate and advocate for the LGBTQ community.

“My moms are gay and I support other people who are gay,” said Maya Lieberman Bachman, 14, enjoying an unobstructed view from the bed of a pickup truck in front of TD Bank on Main Street before the parade. “I like being here for the fun of it, and being able to support people.”

With a “Born This Way” flag hung behind their lawn chairs as they cheered and waved, Maya, her friend Jane Techu, 13, and her mother Renee Lieberman Bachman, of Huntington, were also awaiting the arrival of Maya’s mother and Renee’s wife, Julie.

Meanwhile, the streets of downtown Northampton began to shine with all colors of the rainbow as people from all over lined up for the parade. Many dressed in costume, while others sported T-shirts supporting LGBTQ rights. Many storefronts on the main drag of Main and Bridge streets flew rainbow flags from their windows.

When the parade began at noon, tens of thousands cheered on marching groups as they passed by. At least 40 floats and over 100 contingents marched in the parade, according to operations organizer Cid White. 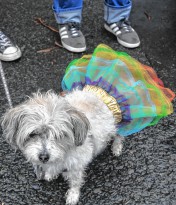 Cleo Gorman, 72, clad in purple head-to-toe for transgender rights, marched as a member of The Raging Grannies, a social justice singing group of western Massachusetts. Gorman attended the second ever pride parade in 1982, which she explained was not as “loving” as Saturday’s event.

“It was scary in the early days because there was this old contingent from one of the conservative churches who were very hostile,” Gorman said. “We had a contingent that had to wear paper bags on their heads because they were afraid of losing their jobs in public schools.”

“But it’s gone up since then,” she continued. “It’s a big relief that this is a love fest; it’s not a hostile experience at all.”

Though victory in marriage equality has been achieved, Gorman said it’s as important as ever to speak up against hate.

“We’re here in numbers, and that’s very gratifying in this post-Trump era when we have a homophobic, misogynistic president who teaches hate and disrespect,” she said.

The Rev. Sarah Buteux of the First Congregational Church of Hadley said she and her group of about 10 fellow churchgoers march for inclusivity.

“We are marching because the United Church of Christ strives to be open and inclusive no matter what,” she said. “I believe that anytime any group of people stands up for the human rights of others, it claims a little more space for the Kingdom of God and makes the whole world a little safer for everybody.”

Staff members and their families rode on Cooley Dickinson Hospital’s float. Linda Riley, infection prevention coordinator at the hospital, said the group marches to send a message about the organization’s dedication to diversity.

“We have a huge commitment to the people of this community, and diversity is one of our values,” she said. “We believe there is room for everyone, and everyone deserves excellent quality health care and the best living situations they can have.”

Alex Rodriguez, 16, of Springfield, is getting ready for a gender transition. Rodriguez attended the event last year, and decided to return this year with friends. Alex said that the Springfield community is not, as a whole, as supportive of the LGBTQ community as Northampton is.

Mary Finn, practice manager of Optic Studios, a women-owned-and-operated business in downtown Northampton, marched with employees in the parade.

“My employees demanded we march in the parade and support diversity, so that’s why we’re here today,” she said.

The first time Finn saw the Pride Parade 24 years ago, she recalled sitting at a table and having just about 300 people show up, a fragment compared to this this year’s expected 30,000.

“I knew the rain would not hold people off,” Finn said of Saturday’s event. “Especially with Trump in power, threatening so many of the rights we’ve achieved over the last three decades, I just knew people would turn out in droves.”

Molly Morin, 24, of Greenfield, brought her 3-year-old son Liam to the parade. Liam loves rainbows and wanted to make a sign for the parade. Morin wanted to bring him so he could have fun, and show him that there are “all different kinds of families.”

“I’m a single mom, so it’s kind of new to him that I’m queer and our family can be anything we want it to be,” Morin said.

Morin used to march in the Northampton Pride Parade as a student with the Hopkins Academy GSA. She explained she is proud to see how outspoken Northampton is about supporting the LGBTQ community, and is hopeful that Pride will spread to Greenfield in the future.

A pride event followed the parade, lasting until 5 p.m., at the Three County Fairgrounds.

White explained that organizers plan the parade each year for the first Saturday of May because it accommodates college students who are likely still in the area, and contributes to a popular time of year for businesses and hotels.

White praised Northampton and surrounding community for their support and inclusiveness.

“The people of Northampton? They’re like friends and family,” she said. In her seven years coordinating the event, White said, the response has always been positive.

Stephanie Quesnel, youth coordinator for the event, echoed this praise. “I personally feel like the community of Northampton has set an expectation, it’s always supportive,” she said.

About the Author: Emma